In 2014 Cece became Chief Storyteller of a new company branded around her existing Twitter handle: @TheLeagueLady. That summer she completed the Social Media and Digital Communication program at Southern Methodist University to obtain a navigation update for the ever-changing digital landscape within the industry.

Over the past few years, Cece has been a busy lady taking pictures, writing blogs, making videos, and tweeting all the while. In 2015 Cece added the City of Richardson to her client portfolio to manage the Wildflower! Arts & Music Festival and Cottonwood Art Festival events. This year Cece worked with the Executive Director of the Virginia Fly Fishing & Wine Festival to launch the first ever Texas Fly Fishing & Brew Festival. Cece has also provided on-site coverage for the Dallas Area Train Show, Huffhines Art Trails, The Plano Rotary Club Blues, Brews & ‘Que, and Super Glow Texas. The Spectacular Senior Follies signed a contract in December 2017 for services through September 2018 to promote their annual show featured on stage inside The Eisemann Center.

Read the full article as featured by Voyage Dallas: http://voyagedallas.com/interview/meet-cece-liekar-campanini-league-lady-llc-plano/ 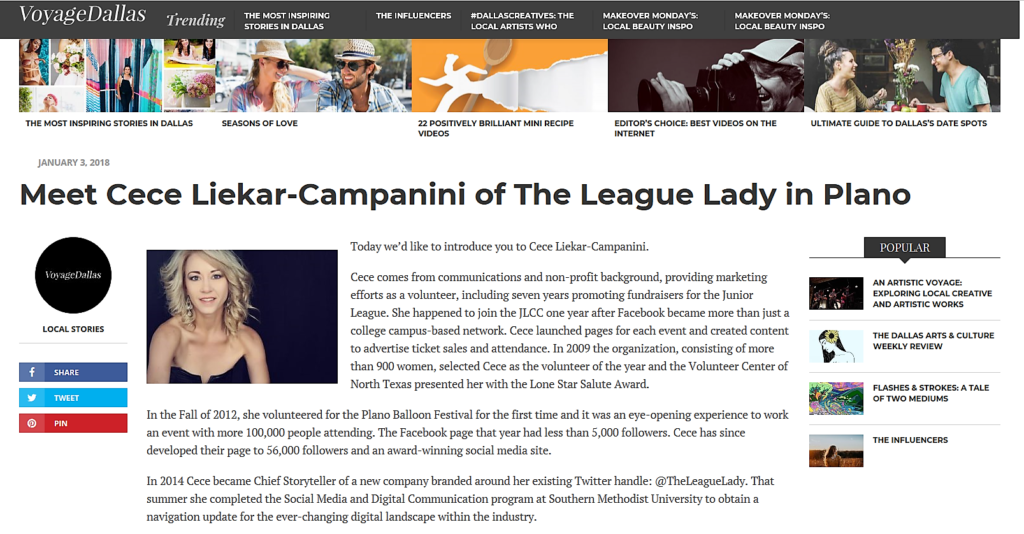